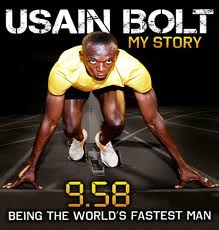 Since those heady days of the Beijing Olympics in August 2008, Usain Bolt has lowered both the 100 metres and 200 metres world records once again – to a barely believable 9.58 and 19.19 seconds respectively – as the World Championships in Berlin brought two more gold medals and yet more superlatives.

At a stroke the Jamaican has become the greatest sports star in the world.

It is about a skinny kid from the parish of Trelawny where they harvest the best yams in the world. It’s about growing up, playing cricket and football in the warm Jamaican sun, then discovering that he could run fast. It’s about family and friends and the laid-back Jamaican culture. It’s about Aunt Lily’s pork and dumplings and Dad’s grocery store in the sleepy village of Sherwood Content.

It is about what makes him tick, where he gets his motivation and where he takes his inspiration. It’s about the highs and the lows, the dedication and the sacrifices required getting to the top. It’s about fast food, partying, dancehall music, fast cars and that lightning bolt pose. It’s about radiating sport’s biggest smile.

This is the story of the fastest man on the planet.