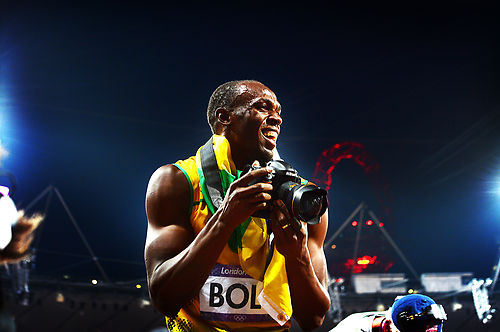 Swedish photographer Jimmy Wixtröm is auctioning off the famous camera Usain Bolt used during the Olympics.  It was right after Usain Bolt, one of the world’s greatest athletes – and the fastest man in the world – had finished the 200 meter finals that the Sportbladet photographer lent him his camera.

As seen in the pictures that since have traveled the world, Bolt first immortalized his compatriot Yohan Blake and then turned the lens towards the gigantic crowd.  After he was done with taking photos, Bolt carved his name on the camera with a screwdriver – and thus made it unique.

Now this camera can be yours. The initiative for the auction comes from the photographer, Jimmy Wixtröm, himself, ” I hope and believe that there is a great interest in this camera and that that interest will generate a fair amount of money to the Swedish Cancer Society. Cancer research is incredibly important, and I see this camera as a chance to contribute. My girlfriend’s father passed away far too early due to cancer and my brother Peter is thankfully now completely recovered after suffering from cancer and undergoing treatment for more than a year – thanks to the great progress that has been done in cancer research.  Part of the money raised through the auction will also go to the Usain Bolt Foundation in Jamaica that encourages children to get education.  This is just the beginning. Me and my brother Peter also have several other projects planned, as we hope to be able to contribute money to cancer research.”
This includes:
1 signed Nikon D4 camera body
1 framed picture 50×70 cm when Usain Bolt uses the camera

To bid on the camera go to ebay link