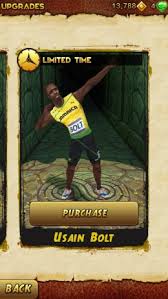 “I am a big fan of Temple Run. I travel all over the world and travel time gives me lots of opportunity to play Temple Run at airports or on car journeys,” said Usain Bolt. “It’s exciting to see myself represented within a game I already play.”

The Usain Bolt character is outfitted in his signature yellow and green, and designed with 3D graphics to deliver a life-like representation. Just like Bolt, the character is gifted with special and unique abilities, allowing him to boost ahead at a record-breaking pace while activating the coin magnet at the same time. Watch out and don’t let Bolt get eaten by the Evil Demon Monkeys!

“This seemed like the most obvious and fitting partnership,” explained Keith Shepherd, co-founder of Imangi Studios. “Personally, we are huge Bolt fans and watched him race to gold last year in London. We cannot think of a better personality and role model to represent the game and encourage our players to keep running.”

With over 500 million downloads between Temple Run and Temple Run 2, the series is one of the biggest in mobile gaming. Since the launch of the original game in 2011, the brand has expanded to include apparel with Komar Kids, digital comics with Ape Entertainment, and card and board games with Spin Master, among other licensing partnerships. Imangi has collaborated twice with Disney to launch Temple Run: Brave and Temple Run: Oz. Both games reached the #1 slot on the App Store.

The Usain Bolt character is available now as an in-app purchase in Temple Run 2 for $0.99, for a limited time only. Download Temple Run 2 on iOS or Android.

About Imangi Studios
Imangi Studios was founded by husband and wife team Keith Shepherd and Natalia Luckyanova in 2008 with the goal of creating small fun games for everyone to enjoy.  What started as a dream job for the couple has evolved into a successful business, with Keith and Natalia now working with a team of other talented game creators. In 2011, the studio developed the mega-hit Temple Run, and followed with Temple Run 2 in 2012. The two games have been downloaded over 500 million times. Based in North Carolina, Imangi Studios is a self-funded and fully independent studio.
Official Website | Facebook | @TempleRun

About Usain Bolt
Usain Bolt is a six times Olympic gold medallist and ‘the fastest man in the world’. The Jamaican sprinter holds the world records in the 100m (9.58 secs), 200m (19.19 secs) and 4x100m (36.84 secs). He has been winning medals and breaking records since 2002 when he won the IAAF World Junior T&F Championships in Kingston, Jamaica. He is a five times World Champion.