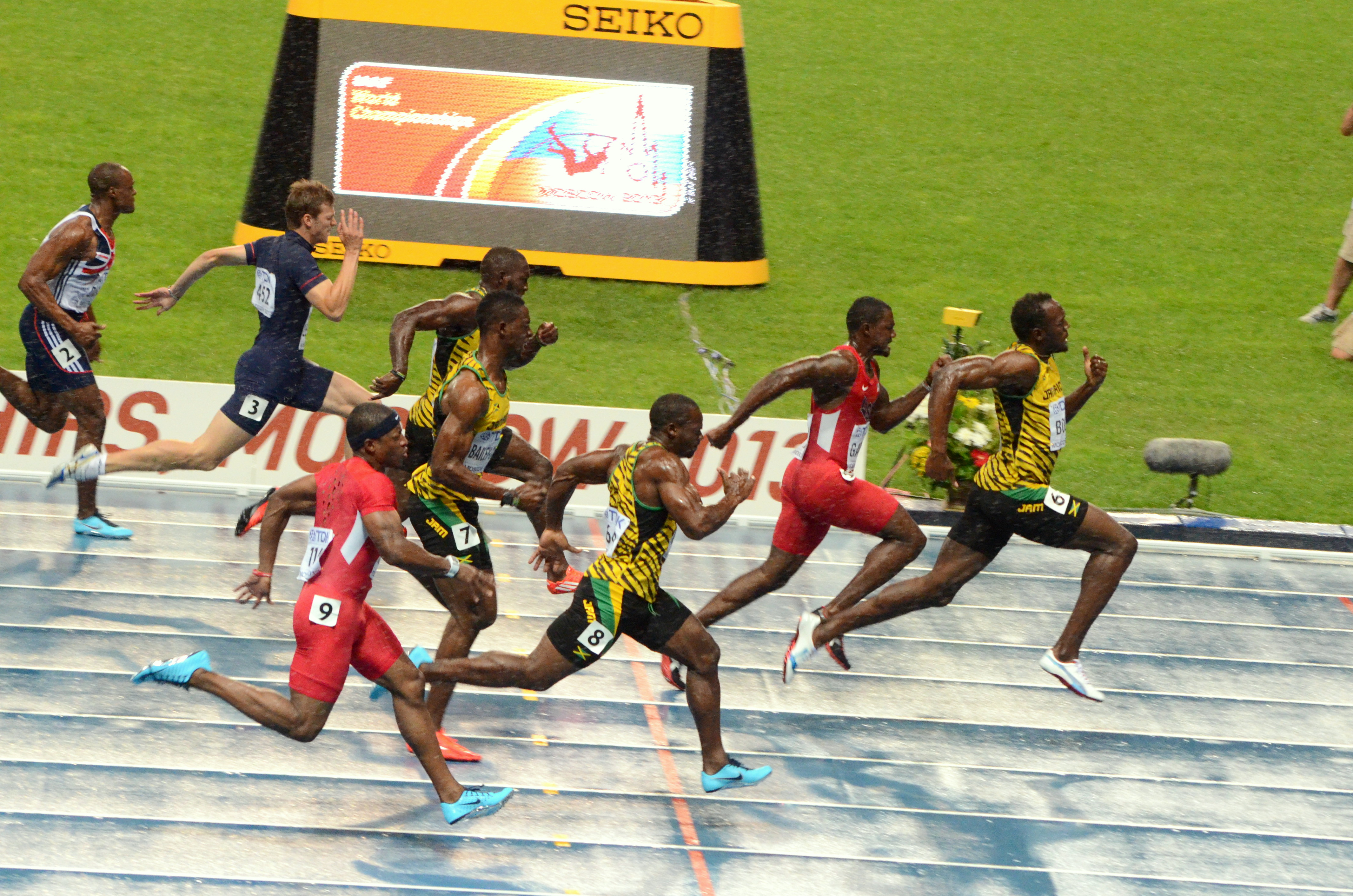 11th August 2013 – In pouring rain in the Luzhniki stadium in Moscow Usain won the World Championships 100m title in a time of 9.77 secs.   The 2009 Champion confirmed his favourite status overpowering American Justin Gatlin and fellow Jamaican Nesta Carter in the final 50m.   His time was  a Russian All-Comers record and season’s best.  Full race report from www.iaaf.org –

For once Usain Bolt had no need to call down the thunder from the sky. Just before the start of the men’s 100m final, a thunderstorm brought the special effects in for him.

Indeed, at the start, Bolt mimed holding up an umbrella as the rain tumbled down. It was just pantomime – as it turned out, Usain Bolt needed no protection, not from the weather, not from anyone else as he raced to his second World Championships gold medal at 100m.

Bolt ran down the wet Luzhniki Stadium track in 9.77 seconds. It was a Russian all-comers’ record, his season’s best but, more importantly, a metre better than anyone else could throw at him. Justin Gatlin took second place in 9.85 while Nesta Carter made it two medals for Jamaica by finishing third in 9.95.

Bolt just might like the rain. The weather was nowhere near as dire, but it was reminiscent of his 2009 performance in Lausanne where he ran 19.59 seconds for 200 metres. Wet or dry, he is hard to beat.

The first five broke 10 seconds, Kemar Bailey-Cole and Nickel Ashmeade – both 9.98 – making it four in the first five for Jamaica. Seventh-placed Christophe Lemaitre could have been the sixth had he not suffered what appeared to be a foot injury 10 metres before the line. Mike Rodgers passed him as he hopped across the line.

It was vintage Bolt. His start was not perfect, just pretty good. Only Gatlin alongside him and the fast-starting Carter, two lanes to his outside, led him. Neither enjoyed the sort of advantage to put Bolt under pressure.

If Bolt is behind you at 50 metres, he will probably catch you. If he is ahead, forget it. He looked to have a little in reserve as he relaxed and flowed through to the finish line. Gatlin, with a win over Bolt this season at the Rome IAAF Diamond League meeting, was obviously the man who might beat him, but a relaxed Bolt in the final stages is never going to be beaten.

Bolt put behind him the nightmare false-start in the final in Daegu two years ago which saw him default his title to teammate Yohan Blake. Blake was absent injured from Moscow, but there is little doubt the result would have been the same had he been here.

Since he broke through to win the Beijing 2008 Olympic title, Bolt now has eight of the nine global sprint titles in which he has competed. Beijing and Berlin brought sprint doubles with all four races won in World record times; in Daegu he bounced back from his 100m disaster to win the 200m; London brought a second Olympic double and it is hard to see how he can be stopped from winning a second World double in Moscow.

He has now extended his span of domination in the 100m to five years, a match for pretty well any other sprinter in history. Carl Lewis did better in one aspect, winning every global title at 100m from the first World Championships in Helsinki in 1983 through to Tokyo in 1991, but Bolt has an edge for impact. His 9.69 in Beijing and 9.58 in Berlin took the event to a new dimension.

Such considerations hardly matter now. Bolt remains firmly on top of the world 100m scene. Although the rain stopped soon after the race concluded, he had earned the right to go home singing.