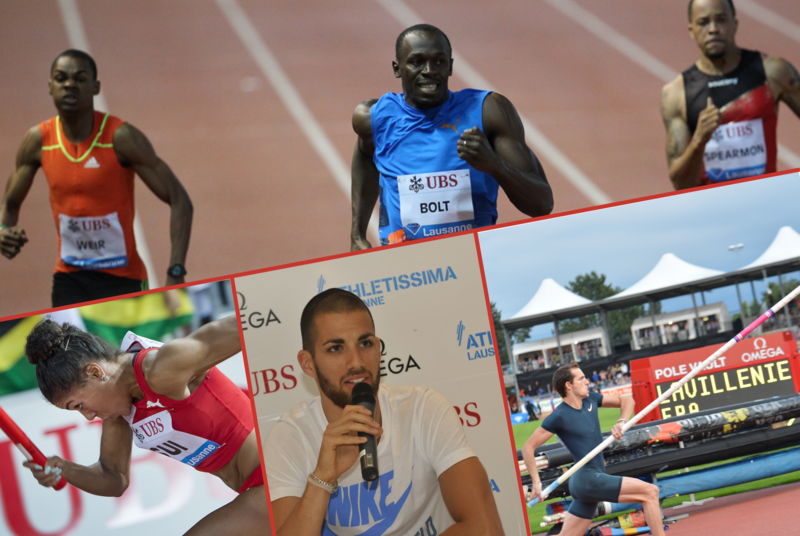 9th March 2015 – The organiser of the IAAF Diamond League meeting Athletissima, Lausanne today announced Usain’s participation in the 200m at their meet on July 9.  It will be his fourth time to run the 200m at the fast Lausanne track.

With just four months to go until the next edition of Athletissima takes place on 9 July, the organizers are pleased to announce that Usain Bolt will compete in the 200m. The man with six Olympic titles and eight World titles will be back in Lausanne to compete in what is his favorite event at the Pontaise stadium “because it has one of the best curves in the world”. A race which will maybe enable him to reach one of the targets he set himself before retiring from competitive sport in 2017: “break the 19 second wall”. He set the current world record of 19.19 in the final of the 2009 World championships in Berlin. It will be the 4th appearance of “Lightning Bolt” in the 200m in Lausanne. With the 19.58 set in 2012, he holds the Pontaise stadium record and also won the event in 2008 and 2009.

Renaud Lavillenie’s domination in the pole vault is ongoing and each competition brings along a new brilliant victory. Proof of that are the four back-to-back victories this winter with bars at 6m or even higher, which made him the first vaulter in history to clear this height four times back-to-back in an official competition. Second demonstration with his fourth European Indoor title won last Saturday in Praha (6.04 m). He won the Lausanne event four times (2010, 2011, 2012 and 2014). His obtained his best result last year with 5.87 meters, just 4 centimeters short of the stadium record set by Brad Walker (USA) eight years ago.

The two of three spearheads of Swiss athletics have also confirmed their attendance. The reigning European champion Kariem Hussein will compete in the 400m hurdles in Lausanne for the second time. Last year, he finished 7th in 49.38. Since then, he dramatically improved his performances and won the European title in Zurich last year. At the end of the season, he further improved his PB by clocking 48.47 at the Continental Cup in Marrakech. This result earned him a 4th place in the world rankings.

Yesterday in the European indoor Championships in Praha, she confirmed her progression towards the elite finishing 5th in the 60 m with a national record (7.11). At last, new European indoor champion Selina Büchel expect to be part in the 800 m.

To celebrate its 40th anniversary, Athletissima will build a traditional chalet on the Place de la Navigation in Ouchy. Several events will take place there on the days preceding the meet such as an Athletissima night, sponsor events, press conferences, etc. The chalet will also be open to the public.

Moreover, the mini-stars relay will take place for the tenth time in the gardens of the Olympic Museum on July 5. Athletes will be invited to hold clinics for children and teenagers on July 7 in Lausanne, Genève, Fribourg, Sion, Colombier and Alle, which is replacing last year’s location Delémont.

A new poster will also be presented to commemorate this anniversary.