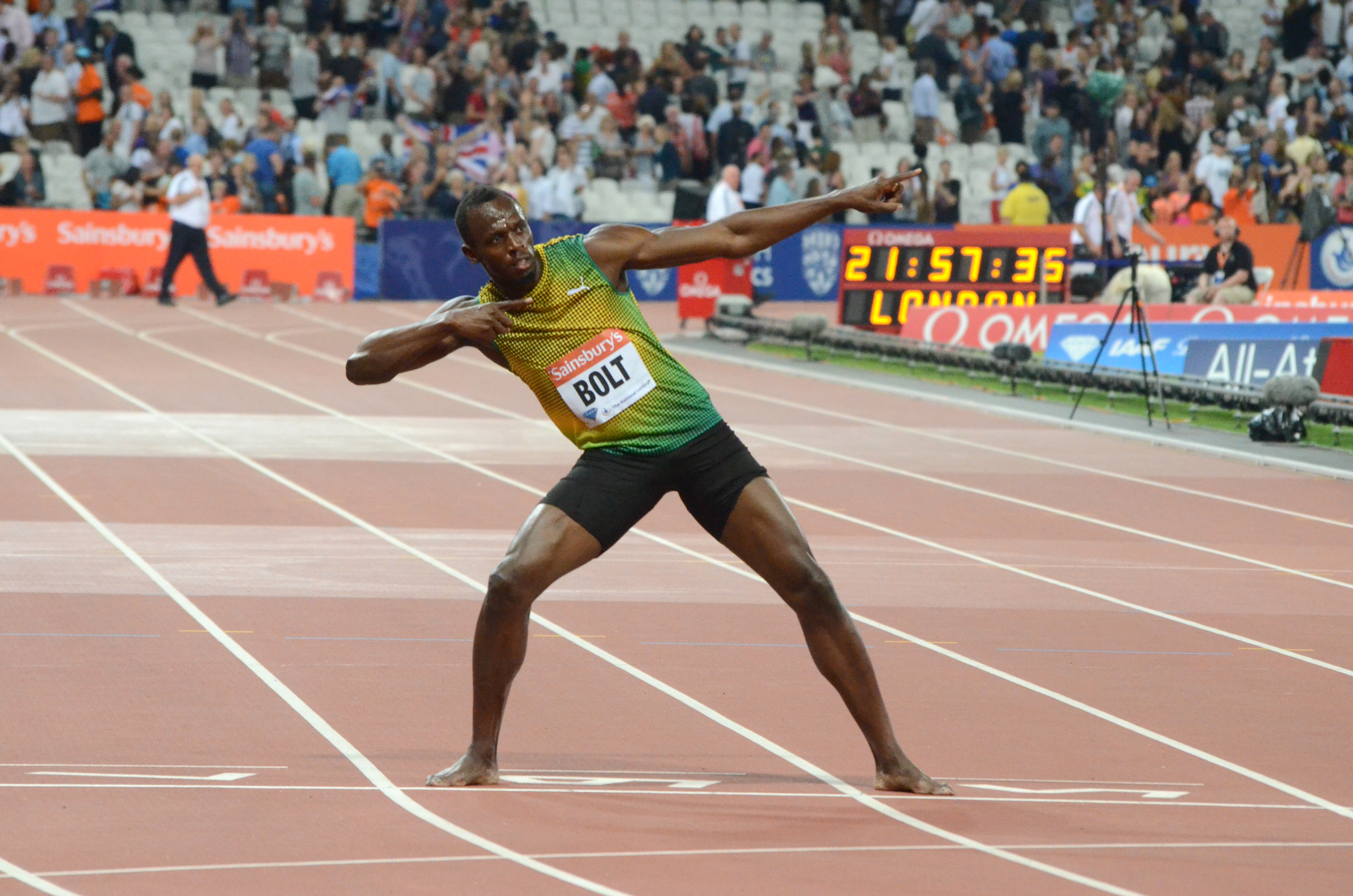 24th July 2015 – Usain returned to racing with a win in the Sainsbury’s Anniversary Games 100m recording 9.87 secs in wet and cold conditions to win his heat and then exactly the same time to win the final one hour later.  Report from www.iaaf.org –

“Bolt is back,” was the message from the stadium announcer after the men’s 100m at the IAAF Diamond League meeting in London on Friday evening (24).

And few could doubt it as the world and Olympic champion produced two impressive performances on a filthy night at the Sainsbury’s Anniversary Games in east London, twice running sub-9.90 into chilly headwinds despite some indifferent starts.

Bolt ran 9.63 in this stadium to win Olympic gold three years ago and 9.85 at the 2013 London IAAF Diamond League meeting here when conditions were decidedly warmer. But the doubters have been many and vocal in recent weeks as the world record-holder skipped meetings with injuries and languished in 62nd place on the 2015 100m world list.

Tonight he moved to sixth when he ran 9.87 in his heat then matched that time in the final, coming from behind to beat Michael Rodgers by 0.03s in this non-Diamond Race event.

“I wasn’t looking for a specific time but I knew I could have gone faster if I had got the start I wanted,” said Bolt. “The key thing coming into this race was trying to get everything right on the track. The heats were good, but the final was not so good.”

A blast of PA reggae music greeted Bolt as he sauntered down the track before his first race, but the tall Jamaican took time to find his rhythm once the gun fired. Following Rodgers out of the blocks, he moved level with the US spritner half way down the track then eased ahead in the closing stages to cross the line in his fastest time for two years. Not bad on a wet track into a -1.2m/s headwind.

Bolt’s time was a full quarter of a second faster than he had previously run this year, but the world record-holder showed it was no fluke as he again overtook Rodgers in the final, this time defying a -0.8m/s wind and even slower start that left him with a metre and a half to make up after 30 metres.

He drew level two-thirds of the way in, then edged in front of his US opponent in the closing stages.

“My coach was happy with my transition and my last 50 metres was good,” said Bolt. “But in the final I got a really bad start, I kind of lost focus for a minute and I lost my form but I got it back at the end. So it taught me a lot, these two races.

“I’ve been running fast in training, but it’s easier in training because you’re under no pressure and you can execute well. My coach has been happy with my technique and my work, but it’s all about getting race-ready now.”

Kemar Bailey-Cole was third in 9.92, the Jamaican taking 0.01 from his personal best, while Britain’s Chijindu Ujah was fourth, equalling his PB with 9.96, 0.02 ahead of in-from Frenchman Jimmy Vicaut.