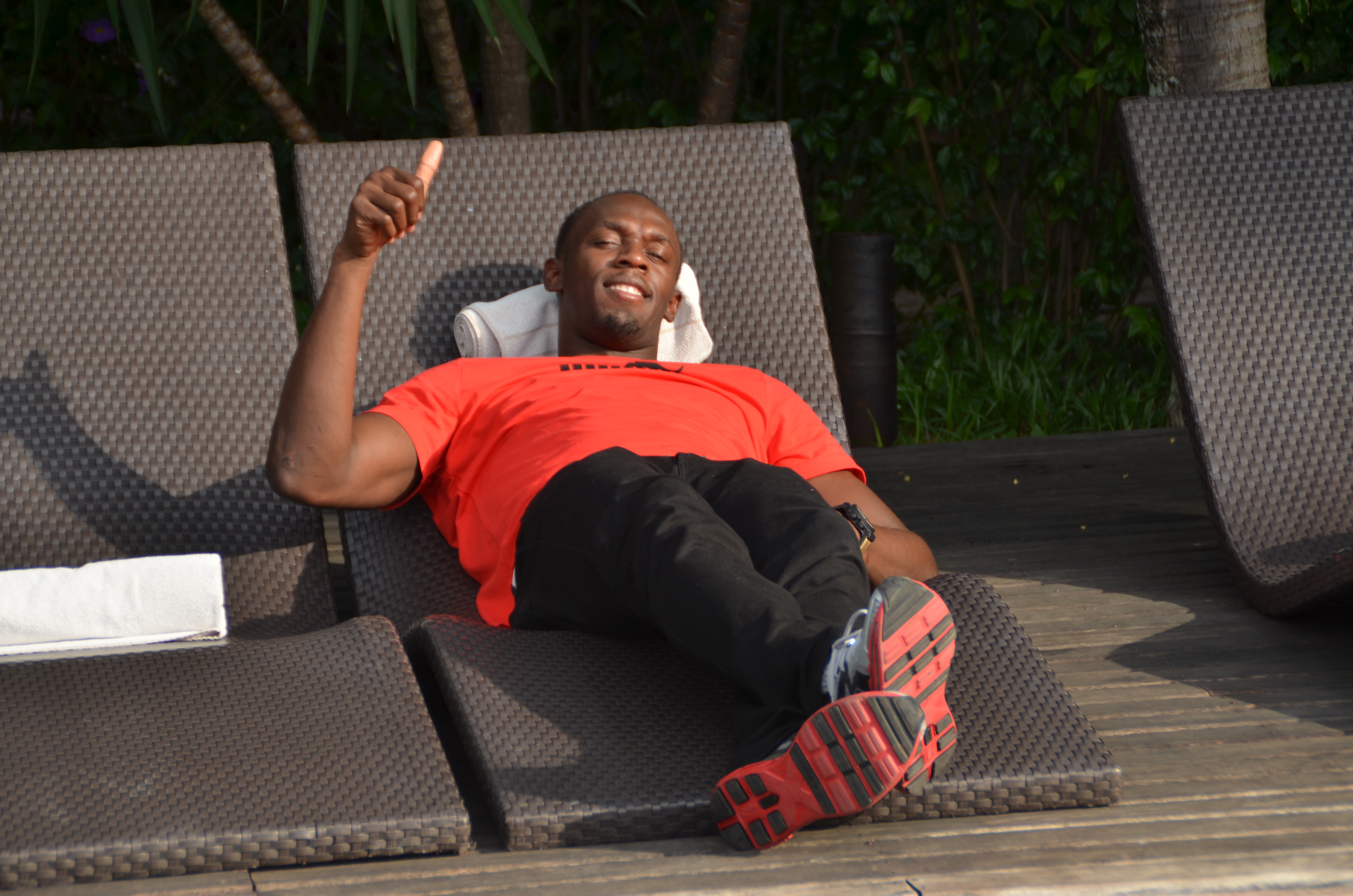 10th July 2015 – Usain’s next competition will be the Sainsbury’s Anniversary Games in London on July 24.  Press release from British Athletics –

The world’s biggest athletics superstar, Usain Bolt, will lead a stellar global cast at the re-opening of the London Olympic Stadium on Friday 24th July.

Fans are expected to flock to the stadium to relive memories of 2012, as the Sainsbury’s Anniversary Games deliver the best of the Olympics and Paralympics in three days of action-packed athletics.

The Mayor of London Boris Johnson said: ‘The opening night of the Anniversary Games has attracted the strongest field ever assembled for a single night of athletics, providing Londoners with another ‘I was there’ moment.  The chance to see a living legend like Bolt is very rare and we are delighted to be able to welcome him to the reopening of the stadium where he so thrilled us all at the 2012 Games.’

“It is a beginning of a new chapter for the Stadium and there will be many more amazing nights to come – it is wonderful that we are starting in such style”.

Bolt – considered to be one of the greatest sportsmen of all time last competed individually in the UK at the Sainsbury’s Anniversary Games in 2013 where he won the 100m in 9.85 seconds.

The 100m and 200m world record holder, winner of six Olympic and eight world titles is looking forward to returning to the scene of his spectacular Olympic triumphs.

Bolt said: “London is a special place where I love to compete and I am looking forward to the Sainsbury’s Anniversary Games on July 24.

“I have great memories of competing in the Olympic Stadium in the summer of 2012 and in the previous Grand Prix meets in London.

“The British fans are always great and I expect there will also be a lot of Jamaican fans in the stadium. It will be amazing to put on another great show for them under the floodlights on the Friday night.”

British Athletics Chief Executive Niels de Vos said: ‘The Sainsbury’s Anniversary Games at the Olympic Stadium is becoming one of the country’s ‘must see summer events’ for sports fans around the country, up there with Wimbledon, the Open and Formula 1.

“The combination of the Olympic Stadium, the Park, the very best athletes in the world and the memories of that fantastic summer of 2012 make this an inspirational event’

Mark Given, from Sainsbury’s sponsorship, said: “The Sainsbury’s Anniversary Games will be the ultimate celebration of athletics this summer, and adding Bolt to the already stellar start list guarantees that visitors are in for a true spectacle. With so many London 2012 champions competing, it makes it all the more fitting to be back at the Olympic Stadium and we hope that athletics fans and families have a fantastic day out.”

The event takes place just four weeks before the IAAF World Athletics Championships in Beijing and will be the final time the original London 2012 track is used, before a new surface is laid for the London 2017 World Championships.

British Athletics have secured the right to host athletics in the former Olympic Stadium for one month every year for the next 50 years from 2016.

To buy tickets to the Sainsbury’s Anniversary Games visit britishathletics.org.uk.