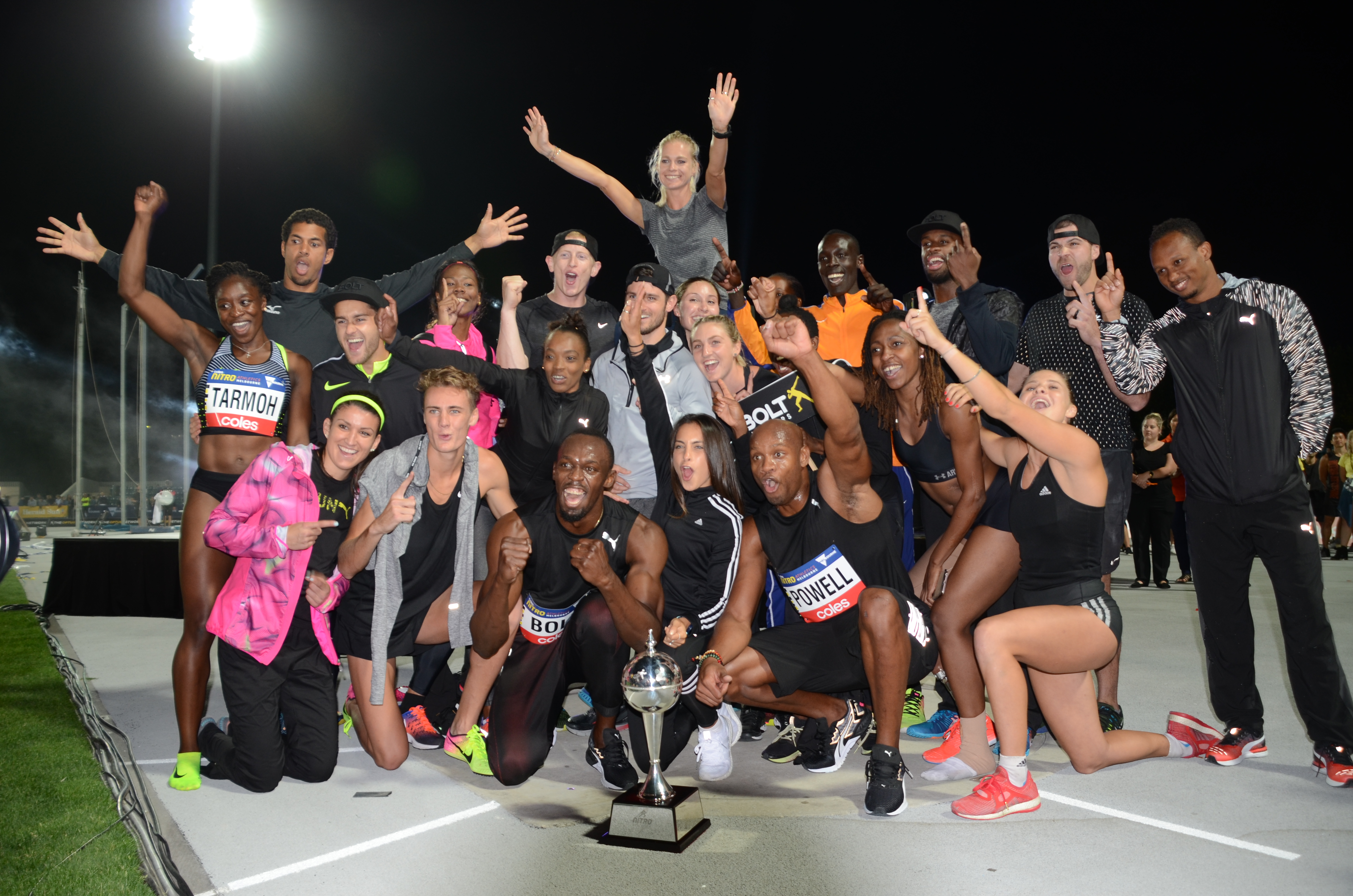 Saturday 11th February 2017 – It was hailed as a great success.  The first ever Nitro Athletics series ended with the Bolt All-Stars winning the trophy in a close contest with hosts Australia.   Full stadiums, excited fans, new events, close competition and a sprinkling of Usain Bolt stardust brought fun and excitement back to athletics.  Report from nitroathletics.com.au –

Usain Bolt led his All-Stars to victory in the inaugural Coles Nitro Athletics Melbourne series by winning two events, including the relay finale, at Lakeside Stadium in front of a sell-out crowd on Saturday night.

He declared the fresh concept and take on track and field a brilliant success after helping his team win the mixed 4x100m relay at the end of the night to confirm top spot on the ladder above Team Australia.

A raucous capacity crowd of 9107 were vocal throughout the night as the home side did all it could to cause an upset and spoil the party for Bolt and his All-Stars with IAAF president Sebastian Coe smiling approvingly from the stands.

The Jamaican sprint king had loaded the start list for the final round with his front-line stars, putting himself in the 150m and slotting in US Olympian Jenna Prandini into three events.

Both delivered – with Bolt storming to a 150m win and Prandini capturing victory in the 60m – her fifth victory over the three-meet series.

The pair combined in the relay, with Asafa Powell changing to Bolt, who again stormed down the back-straight to hand off to Prandini, who delivered the stick to American Jeneba Tarmoh who cruised home to top off a stellar three nights for Bolt’s team.

“It was brilliant, it was exciting, it was different and every night came down straight to the wire,” Bolt said with a smile after being chased around the infield by a large group of athletes holding champagne bottles.

“Tonight it came down to the last event, it was a brilliant excitement and I think everyone in the track and field world really enjoyed this.

“I knew this is what track and field needed, the energy and the vibe – everybody I talked to really enjoyed it.

“The IAAF president is here and he enjoyed it so for me it’s been brilliant all around and I’ve had so much fun, it was a team effort and it was just brilliant.”

The celebrations that took place on the stage after the relay were typically Nitro, considering how the week has played out, athletes mobbed Bolt talking selfies, laughing, signing and spraying champagne.

In a moment that summed up the week, as the stadium speakers played Queen’s ‘We are the Champions’ Bolt sang  – and the crowd joined in.  A moment that will be etched in even’s Bolt’s memory as a defining night for track and field.

Jamaican teammate Asafa Powell did his bit for the All-Stars again winning the 60m with ease and leading off the series-clinching relay with a superb start around the bend.

“Yeah, tonight we got off to a better start,” Powell said when asked if his team would win after taking full points in the 60m sprint.

“I felt quite comfortable, you know I just came out here to win tonight and I did.

“It was quite comfortable, because you know I did not want to put too much effort with the relay at the end, that’s a big one.”

One of the biggest performances of the final came from 16-year-old Australian sprinter Riley Day who stormed home to win the 150m ahead of a quality field including 2015 4x100m relay world champion Natasha Morrison from Jamaica.

“I was not expecting that to be honest, I was just trying to catch the girls in front of me and I’m really happy with that run.

“Just to be running against these top-quality women is an honour.

“Nitro’s just the best thing, I’ve loved Nitro, every minute of it, it’s been an amazing experience.

“My family is really proud of me, they’ve just been saying good luck, we’re proud of you and keep going – my facebook is going off the hook at the moment.”

Olympic 200m semi-finalist Prandini also had rave reviews of the whole Nitro concept and like fellow American Jarrion Lawson said a number of her teammates were jealous that she was here for the series.

“It’s been a whole lot of fun just getting to hang out with these people and it’s good to be a part of something that has never been done before, I’ve had a lot of fun today,” Prandini said.

“Yeah definitely (tell people back home how good Nitro is), I’ve had so many people talk to me about it and it’s pretty awesome – I think it will be bigger and bigger every year.”

A new event for the series featured on the final night was the mixed 2x100m hurdles relay which was won by Team Japan, featuring Olympian and captain Wataru Yazawa, with China coming second.

Team England got a win in the para-athlete women’s 100m with Erin McBride just edging Japan’s Mana Sasaki who was also just ahead of Australian sprinter Ella Pardy.

Another talking point from the night was Luke Stevens holding off reigning Olympic 400m hurdles champion Kerron Clement in the mixed 2x300m relay after receiving the baton from Morgan Mitchell.

The 23-year-old sprinter took off hard with a slight lead at the changeover and did just enough down the home straight as the local crowd screamed at him to keep the American behind him.

“About seven months ago he won the gold medal in Rio, such a good guy, it was a good hit-out and even if I got second I would have been proud with the run,” Stevens said.

“I gave it my all, every time you wear green and gold you wear it with pride and I just used that underdog status about me, I knew I was in it, had all my teammates on the side.

“The crowd has been the best part of this thing.”

The last word should belong to Bolt, whose support and promotion of the event ensured the inaugural series was a success.

“No one has ever been a part of something this much fun,” Bolt proclaimed.

“Because you know your teammates are depending on you, you’re competitive but at the end of the day it’s about having fun, that’s what we need in the track world.

“It was just magnificent…”