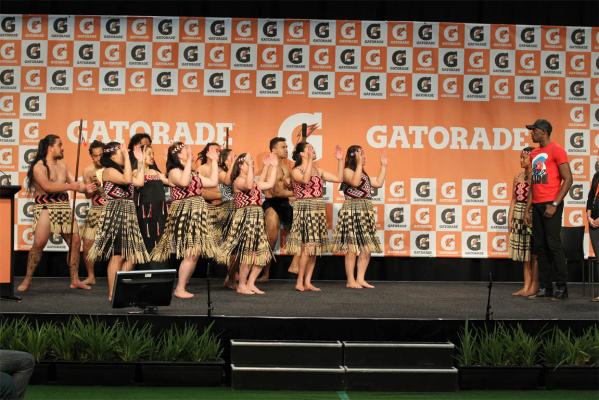 The jury’s out on whether Usain Bolt has hoops game, but there’s no doubt about his hops after he met the back-to-back champion New Zealand Breakers in Auckland today.

Bolt, the six-time Olympic gold medallist and fastest man on the planet, got together with the Breakers as part of an appearance organised by mutual sponsor Gatorade today.

There was a nice synergy too, with event publicists only too happy to point out that both Bolt and the Breakers are going for a threepeat – the Kiwi basketball club for three straight Australian NBL titles, and the Jamaican sporting superstar for a hat-trick of golds at the 2016 Games in Rio.

And though Bolt was keeping well clear of anything resembling full-on basketball, he did show some glimpses of his capabilities during an informal shoot-around with the extended Breakers squad.

He admitted beforehand that we shouldn’t expect too much from his shooting, and that he preferred the more explosive aspects of the game.

“I’m not really a shooter. I like to dunk, but I can’t really shoot that well.”

But surely the man who has said that he’d like to play football with Manchester United and also has some claims as a cricketer of some repute could make a free-throw?

So we watched, and waited.

He missed his first eight from the charity stripe, even though his form was more than respectable.

Finally, he swished on his ninth. The whole gym let out its collective breath.

The free-throw finally conquered, Bolt then stepped back and drilled his first three-pointer, complete with arm-waving celebration move.

Now the showman was warming up.

The monkey off his back, so to speak, Bolt then took a couple of bounces to the hoop and rose up to double-hand dunk. It all looked so easy.

He was right. He’s a dunker, not a shooter.

Then he goes in for a 360-degree slam, rises high, spins around and only just fails to nail it. Yes, the athlete definitely prefers to soar than to shoot.

And that was about it. He played a little bit of one-on-one with the seven-year-old son of Breakers owners Paul and

Liz Blackwell, he shot the breeze with CJ Bruton, he posed for photos with the squad and a few lucky VIPs, and then he was off.

So, did he really have game?

“He can play,” said Bruton, the three-time Olympian who spent the most time with the biggest sporting star on the planet. “At what level, that’s still yet to be determined.

“But there’s no doubt he’s one of those talents that can just get out on the floor and play, and he loves every sport which is great.”

Bruton said the subject of threepeating would no doubt come up when they got together with the sprint sensation for dinner tonight, but he did say Bolt had confessed to being a little out of his comfort zone trying to make jumpers in front of an audience.

The 26-year-old world record holder for both the 100m and 200m said his visit to New Zealand had been “nice”, though he clearly wasn’t enamoured with a stormy day that had greeted him upon his arrival in Auckland.

He said the powhiri (welcome) had given him “chills” and he’d been impressed by the “energy that was there for me”.

He also let the crowd at the Breakers appearance in on a little secret about his histrionics on the start line before his big races.

Maybe that was what was missing at shoot-around. He needed to clown around a little more.

Bolt is in the country for just a few hours and a handful of public appearances, to promote Gatorade.

And like other high-profile visitors who have been in New Zealand recently, security around Bolt is tight. The sprinter is off limits to the media until his final appearance at a press conference later this afternoon.

Earlier in the day Bolt’s visit kicked off with a traditional Maori welcome from 350 staff at Frucor Beverages – the New Zealand distributor of Gatorade – in Manukau.

One of the factory’s warehouses had been transformed into a scene reminiscent of the Kiwi bush – complete with native bird calls and flax bushes.

Tapping his size 13 feet along to the songs that welcomed him, Bolt told the excited crowd how happy he was to be in New Zealand.

“What a wonderful welcome. You guys are full of energy.”

And he said the country was living up to its name.

“This is the Land of the Long White Cloud? It [the weather] is really bad out there.”

Bolt was presented with a pounamu pendant in the shape of a koru followed by a haka performed by Frucor staff.

“You guys scared me a little bit,” he said. “It looks like something I’d like to do, but we’ll see.”