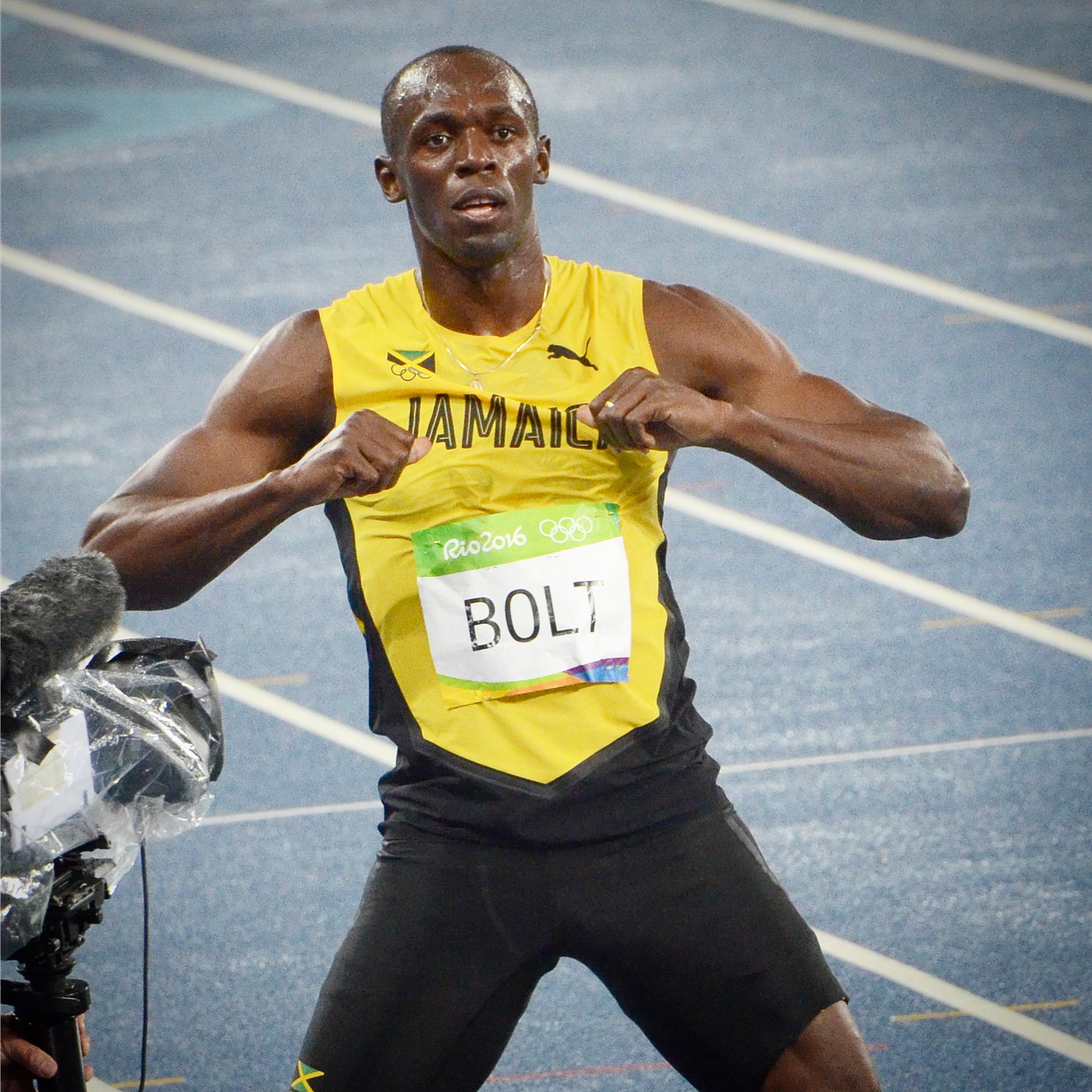 18th August 2016 – Usain won his eighth Olympic Games gold medal taking the 200m title in Rio.  He dominated the race from the gun to give all the fans in Rio and around the world what they came to see.     Race report from www.iaaf.org –

The historic ‘triple triple’ came one giant step closer as Usain Bolt completed the second part of his Rio assignment by securing a hat-trick of Olympic 200m titles in typical style.

In the pre-race build up, the Jamaican global icon had spoken of having “a crack” at his own seven-year world record, but in truth injuries this year have impacted on his fitness, and the damp, slightly chilly conditions inside the Olympic Stadium probably precluded any realistic bid.

However, as he has done for so much of his astounding career in the event he calls his “favourite”, he proved so much better than the rest.

Tonight he stopped the clock in 19.78 – coincidentally exactly the same time as he clocked in the semi-finals – to strike gold by an emphatic margin of 0.24 from Andre De Grasse, who secured Canada’s first medal in the event at an Olympic Games since Percy Williams struck gold at the 1928 Amsterdam Games.

In a blanket finish for the bronze, Christophe Lemaitre of France was given the verdict in 20.12 despite recording exactly the same time to the hundredth as Adam Gemili of Great Britain. One hundredth further behind in fifth was Churandy Martina of the Netherlands, who like Bolt was appearing in his third successive Olympic 200m final.

However, in truth – despite the loud cheers from the French contingent celebrating Lemaitre’s medal – the race was all about Bolt and perhaps he best summed up everyone’s thoughts in his own words.

“I don’t need to prove anything else, he said of securing his third Olympic 200m gold medal and eighth in total. “What else can I do to prove to the world I am the greatest?”

With the eight finalists introduced to the crowd to the sound of loud rock guitar music, all eyes were on Bolt, who mouthed the words “are you ready?” to the camera before what many anticipate will be his final Olympic appearance in any individual event.

From the outset, Bolt – drawn in lane six – took control of the race and after 50 metres he was already rapidly closing the stagger on Lemaitre and Martina, the two athletes on his immediate outside.

Into the home straight, Bolt had already opened up his significant lead on the rest of the field with the remaining seven athletes strung out evenly across the track.

As the giant Jamaican entered the latter stages with a grimace, it was clear he was doggedly determined to post an impressive time to seal his individual legacy at the Olympic Games.

He flashed past the line to the acclaim of a raucous Olympic Stadium in 19.78 – much slower than his two previous gold medal-winning times in Beijing 2008 (19.30) and London 2012 (19.32) – yet tonight was genuinely all about winning and creating history, once more.

De Grasse, who had cheekily eye-balled Bolt when setting a Canadian record of 19.80 in the semi-finals, was the one athlete to significantly emerge from the pack in the final 60 metres or so to take silver and add to the 100m bronze he snared last Sunday.

With the naked eye it was impossible to separate Lemaitre and Gemili at the finish line, but it was the former athlete who was awarded the gong by just three thousandths of a second to secure France’s first Olympic medal in the event since 1960.

Gemili, who lay prostrate on the track after the result flashed up on the scoreboard, admitted he was “gutted” to miss out on a medal by such a fine margin.

Martina was officially given 20.13 – although in reality he was only just three thousandths behind Gemili – to claim fifth spot in a second successive Olympic 200m final.

World leader LaShawn Merritt of the USA, competing in his sixth race in Rio having earlier earned 400m bronze, may have been a little fatigued and had to settle for sixth in 20.19. For the record, Panama’s Alonso Edward, the 2009 world silver medallist, claimed seventh in 20.23 – the fastest time ever recorded for seventh in a 200m race. Turkey’s Ramil Guliyev ran 20.43 to place eighth.