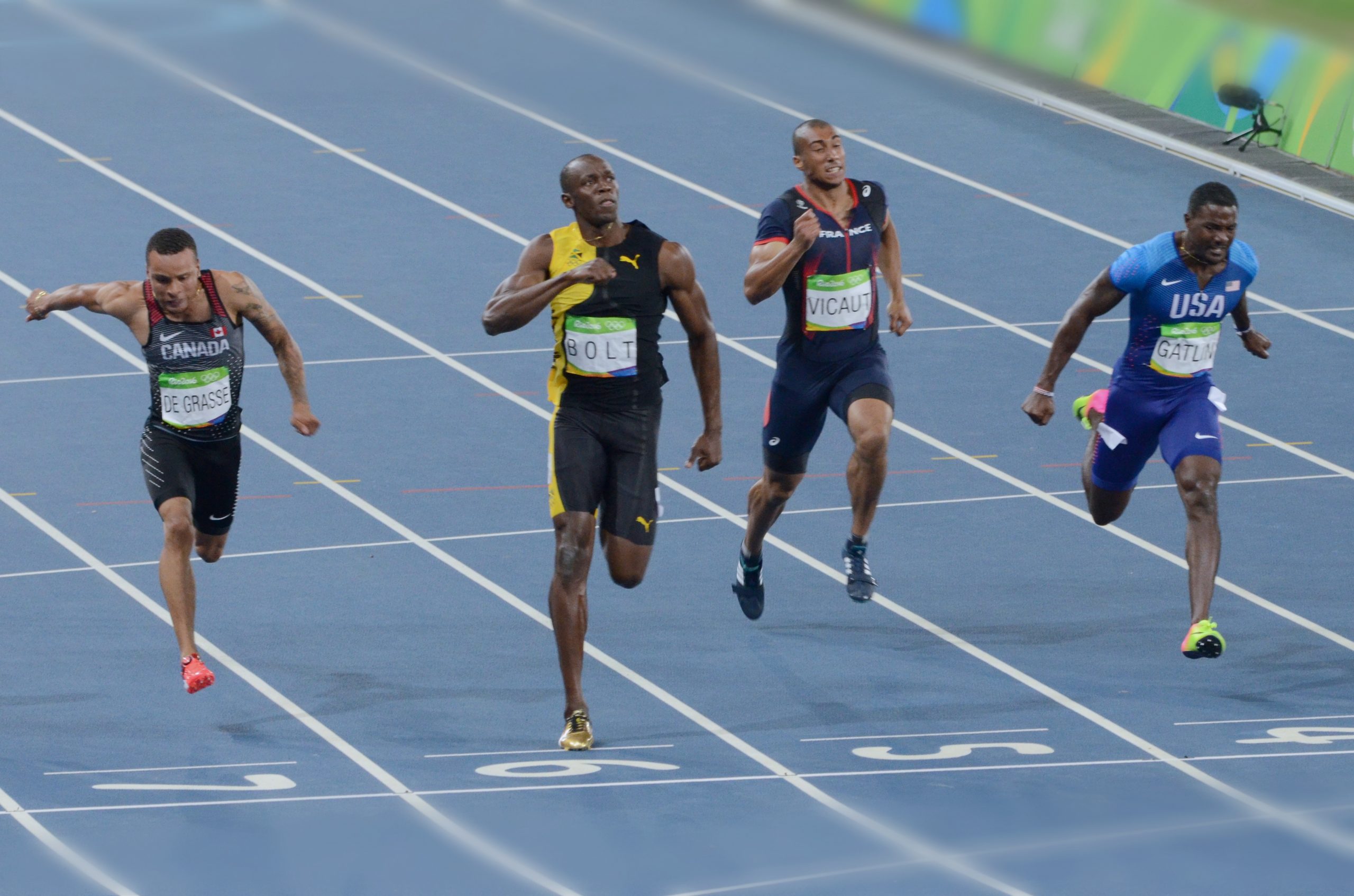 15th August 2016 – Usain created history by winning his third Olympic Games 100m gold medal in front of a capacity crowd at the Olympic Stadium in Rio.  After wins in Beijing and London Usain added the Rio crown with a time of 9.81 secs ahead of Justin ratlin (USA) and Andre De Grasse (CAN).  Race report from www.iaaf.org –

If Usain Bolt established his living legend status at the London 2012 Olympic Games, athletics’ answer to Santa Claus and the Tooth Fairy rolled into one carved yet another notch in history when he became the first man in history to land three successive Olympic 100m titles.

The Jamaican global icon recovered from a sluggish start to run down his US rival Justin Gatlin in the final 30 metres to stop the clock in 9.81 and clinch gold by a clear margin of 0.08.

It was the slowest time of his three Olympic successes but nobody in near-capacity Olympic stadium seemed to care, the chants of ‘Bolt, Bolt, Bolt’ echoing around before and after the race.

History had been written once again and the ‘triple triple’ is well and truly on as he chases a record-equalling nine Olympic athletics medals to match the achievements of Finnish distance legend Paavo Nurmi and American sprinter/jumper Carl Lewis.

Gatlin – who became at the age of 34 the oldest man ever to win an Olympic 100m medal – had to settle for silver to complete the full complement of Olympic 100m medals, having also struck gold in 2004 and bronze in 2012.

Completing the podium was Canada’s rugged but effective Andre de Grasse, who trimmed 0.01 from his lifetime best to run 9.91.

Coincidentally it was the same 1-2-3 as the World Championships Beijing 2015, except on that occasion De Grasse shared his bronze medal with Trayvon Bromell.

Bolt, who next goes to his marks on Tuesday morning’s 200m heats, said of his victory: “Somebody said I can become immortal. Two more medals to go and I can sign off. Immortal.  It was brilliant. I didn’t go so fast, but I’m so happy I won.”

Gatlin was satisfied with his efforts saying: “We work 365 days a year to be here for nine seconds. At the age of 34, to race these young guys and still make the podium feels so good.”

Introduced to the crowd in gladiatorial fashion, the eight finalists emerged from the tunnel one-by-one, which made for great theatre.

Ivory Coast’s Ben Youssef Meite chose to beat his chest when jogging into the stadium. Akani Simbine of South Africa looked like the cat that had got the cream.

Gatlin, a man who still polarises opinions because of his controversial history, was roundly booed crowd while Bolt – competing in a special custom-made uniform for the final – milked the applause and stepped out on to the track with arms outstretched in a pose resembling Rio’s famous Christ the Redeemer statue.

Once the gun went, Gatlin, who was running in lane four, two lanes inside Bolt, who made his customary slick start, although Simbine was actually the quickest away.

By comparison Bolt – who had the second slowest reaction time – somewhat lumbered out the blocks and after 20 metres was last of the eight-man field.

At the halfway point, Gatlin’s advantage had extended with Bolt needing to make up at least two metres.

NO NEED TO PANIC

Yet as the race unfolded the giant Jamaican, with all his experience, refused to panic and almost within the blink of an eye had caught and passed the US sprinter.

He was champion, again, while Gatlin has to settle for silver.

De Grasse himself added another medal to his rising swag after unleashing a strong late finish to take the bronze.

The 2012 Olympic silver medallist Yohan Blake produced an accomplished piece of sprinting to claim fourth in 9.93, his fastest 100m time for four years.

He was holding a medal position with 20 metres remaining only to be see De Grasse and Blake flash by the final few strides and he had to settle for fifth in 9.94.

Meite, who had set a national record of 9.97 in the semi-final went 0.01 quicker again in the final to place sixth.

Completing the top eight, but performing under-par on this occasion, were European record holder Jimmy Vicaut (10.04) of France and 2016 world indoor 60m champion Trayvon Bromell of the USA (10.07).

But the final word should go to the first man in history to secured a hat-trick of Olympic 100m titles who simply added: “I told you guys I was going to do it.”

Should we have ever doubted him?